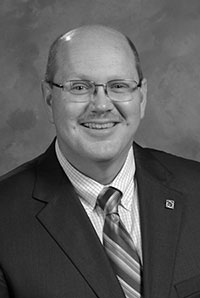 Mark Hensler has been the director of the Ohio Military Band since 1995. He has led hundreds of concerts including appearances at “Tall Stacks”, summer concert series, civic functions, and senior living communities.

Mr. Hensler is currently the Director of Professional Development for the Ohio Music Education Association, (2014-present), and a Past President of the organization. He appears frequently as euphonium soloist with high school and community bands in the Greater Cincinnati Area. He is an avid band historian and collector of band memorabilia and recordings.

In 2014, the PRMS Band was selected to perform at the OMEA State Professional Development Conference (PDC) held in Columbus, OH. In 2006, Mr. Hensler was named "Educator of the Year" by the PTA for Pleasant Run Middle School, Northwest Local Schools and Hamilton County, OH.

He received a Bachelor of Music Education from Morehead State University, KY, where he studied euphonium with Dr. Earle L. Louder. In 1994 he earned an MBA from Miami University, Oxford, OH. He resides in Fairfield Township, OH with his wife Jenni.