Every year, we play 12 to 18 concerts from late May to early December. Our concerts are typically on Thursday nights, and start at 7 or 7:30 pm.

Our concert venues vary. Some of the different settings we play in are retirement homes, parks, and special events, like on Veterans’ Day.

Among our ranks, we have professional musicians and music educators to people that just love music, and our members ages range from high school age to people in their 90’s!

We are open to anyone who loves to play music, and enjoys the company of fellow musicians. Our members also have a variety of skill levels as well.

The Ohio Military Band has a very long and rich history. While we are no longer directly affiliated the any branch of the military, we have roots dating back to pre-Civil War. We also have several veterans in the band from all branches. Read on to find out more! 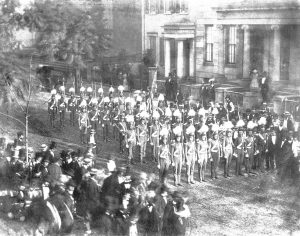 The Civil War and After

The Chartering of The Ohio Military Band 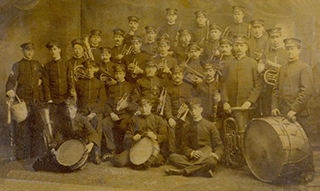 On April 21st, 1904 during the presidency of Teddy Roosevelt (1901-1909), thirteen musicians of the former First Regiment Band signed a Charter to “The Ohio Military Band” in Cincinnati as a volunteer and social band. Charles Diss was the first director of the band and rehearsals were held at Brauer’s Cafe located at the Liberty Street Viaduct and State Ave. Lunch after rehearsals usually included rye bread, head cheese, onions, Kosher pickles, limburger cheese, and lots of cold beer.

As the band grew in membership, new quarters were acquired for $12.00 a year at 210 Post Square. It was a fourth floor loft with one electric light bulb and a warm morning oil heater above the Cincinnati Silver and Gold Refining Company. Other rehearsal sites over the years have included:

After Charles Diss (founding director), directors of the band have been:

The band is not currently affillated with any organizations and is supported through concert donations, and membership contributions. The membership ranges in age from 14 to 93 years young and many of the members do have military experience. The band performs for retirement centers, church festivals, community concert series, and other civic and social events.

The Longest Running Band in Cincinnati

In 1908 the City of Cincinnati directory listed 36 concert bands including the “Ohio Military Band”. Of the 36 listed in 1908, the OMB is the only band still in existence! Friendship, respect for each other, camaraderie, and a willingness to volunteer keep the band performing into our 114th year! LET THE BAND PLAY ON!